Skip to menu Skip to content
Home|Latest news | ‘I returned with a heightened sense of freedom – permission to grieve as I need.’

‘I returned with a heightened sense of freedom – permission to grieve as I need.’

This was a comment from Anne, who attended the TCF retreat weekend in Derbyshire for parents bereaved in recent months and years. She wrote about the weekend in her recent blog post:

“Last weekend I attended a retreat for newly-bereaved parents through The Compassionate Friends. The gathering – fifty parents and ten volunteers all of whom had lost a child – was at Willersley Castle hotel at Cromford in the Peak District. I met so many friendly helpful folk with whom I shared Angi’s story, as they shared their childrens’ stories with me. Sad – yes – but also uplifting as together we all felt less alone in our grief. We attended small groups tailored to our individual needs; we made candle jars which we all lit on Saturday evening. Poems were read and tears were shed, but together we found comfort and support.

“I returned home, still profoundly sad that my family has been reduced to my three adult children, but with a sense of ‘okayness’ and the will to carry on as Angi would want me to. Life will never be the same without my sweet babe, and my norm has been forever changed. And yet there is no other way to proceed but to put one foot in front of the other and carry on.

“Other than bringing back with me the feeling of support and so much empathy of all those at the gathering, I returned with a heightened sense of freedom – permission to grieve as I need. For me this message was the theme of the weekend, and I say a huge thanks to all those at TCF who give their time so freely and lovingly to offer encouragement to those in their time of need.”

Jane also wrote about her experience at the retreat weekend:

“We sit and chat, about her son and mine, and I immediately feel better ... it is definitely helpful to talk – not something I have been doing.
Together we go downstairs, there is a notice board with details of the weekend and clip boards to sign up to for discussion groups. Suddenly I see topics that hit me straight away. One in particular is Post Traumatic Stress and I think wow it’s got a name what I’m feeling … psychologists have now said that the shock parents feel after loosing a child has some of the symptoms of PTSD. It is oddly comforting as I had started to think I was going crazy, experiencing flashes, anxiety and uncontrollable tears – all terrifyingly new, not me at all.

“There were sessions on how to cope deal with –
Special occasions (no longer special in any way )
Losing child to sudden death
Losing child to illness, accidents, suicide
How do I go on? finding reasons to go on.
How long will it last?
Grief of fathers
No time to say goodbye, sudden death
Dealing with feelings of anger, guilt, remorse
Group for sibblings

“Every group was useful and seemed to apply to most people; it was very clear and very clever.

“Sitting there hearing other people talk, volunteers sharing their stories too, it was cathartic in a tiny way … even though I was sitting in most groups crying and embarrassingly ‘snorting like a pig ‘ trying to regain some semblance of control ... I began to realise it didn’t matter nobody was judging me. Everyone ‘getting it ‘ – no need to worry that you are alone or that you have to hold in the pain … everyone on the same page.

“What an extraordinary relief. As much as one has wonderful friends, no-one can know, except for the people in this room, what it is really like. This was a revelation to me and made me think people should know about this organization – it’s run by these amazing compassionate people…who give their time and experience to other devastated people.

“We ate and ate too, another thing they believe is important during the weekend – each meal gave opportunity to talk to person who you have never met before but to share if you want your thoughts and fears. They were also encouraging people, if you wanted to, to simply exchange email addresses on slips of paper provided, to keep in touch help each other ... a fantastic network.

“Throughout the days there was a craft table – initially I thought how ‘hippy’ but soon changed my mind … everyone could decorate a jar for their children … then on the last evening there was a closing talk and we put little candles inside our jars and lit them. This made me think of all the time people had said to me ... my son had this amazing light ...i t was lovely … just right. I felt that night how lucky I was to have found this group ... there was a feeling in the air that we had all been involved in something very special.

“If anyone you know has suffered actually I learnt it was never too late to get this support) the loss of a child or a brother or sister, I cannot tell you … well perhaps I have tried to … just how good this charity is.” 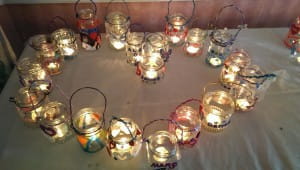 Beautiful memory candle jars lit during the closing words at our Weekend Retreat for recently bereaved. 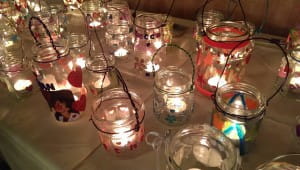 Candle jars in memory of our beloved children. 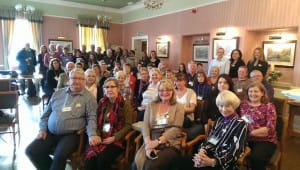