Finding hope in the darkest of places 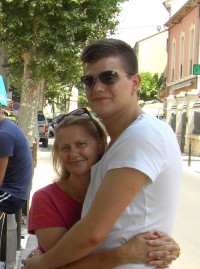 A therapist’s personal experience of losing a son to suicide.

Years ago, as a newly qualified CBT therapist in the NHS, I was allocated a patient whose notes filled me with dread and anxiety. Two years previously, this patient had lost her son to suicide. I wondered what I could possibly offer this poor woman who had suffered surely the very worst fate imaginable; certainly the cruellest thing I, as a mother could conceive. I couldn’t see how CBT could even begin to help her cope with this devastating situation. I felt completely out of my depth and quite hopeless.

Fast forward to 21st December 2019, when I heard the horrific news that my eldest son, Anton had died; a telephone conversation that my mind would replay constantly, horrifyingly, for months and years to come. Alone in his London flat and depressed after the end of his long-term relationship, Anton had drunk a lot of alcohol before taking his own life, aged 32. My world stood stock still. Life as I had known it felt comprehensively annihilated, leaving a colossal black emptiness. This was the dark space in which I now lived.

With March came lockdown. In an extremely fragile state, my days focused entirely on a frantic fight for emotional and psychological survival. I drew upon principles of behavioural activation and mindfulness, keeping busy and physically active to avoid periods of pointless questioning, self-blame and rumination, and occasionally even succeeding. I repeated the mantra “One foot in front of the other” incessantly. Unable to see my other son, grandson or friends and family due to Covid, and incapable of working because of my own mental frailty, I cleaned kitchen cupboards, grew vegetables, repainted the living room. I spent time in the countryside or by the sea, listening to birdsong, the wind in the trees, the waves on the beach. I learned the names of wildflowers, tuned into the feel of my feet in my boots, the ground beneath them. I did yoga every morning and walked every afternoon, whatever the weather. I filled gaps with jigsaws, Scrabble and Sudoku, read books and watched films. Anything to avoid the pain of now.

In addition to grief, I was struggling with trauma, shock, horror. I experienced panic attacks for the first time in my life, generated by internal and external triggers: a memory, an image, a half-formed thought, a glimpse of someone who looked vaguely like Anton. To try to manage the PTSD symptoms I kept a journal. I talked about him and about my feelings with anyone who would listen. I wrote poetry. I exchanged hundreds of messages with friends and family, trying to find words to express the inexpressible, process the impossible, and find some sense of meaning that would enable me to live without my son. In desperation I called helplines and The Samaritans, just to be able to speak the words I needed to say and be heard. I joined groups for bereaved parents and suicide survivors. I read several blogs, numerous websites, and many, many books. Books by those who, like me had lost a child; books by people surviving suicide; books by therapists of all modalities experienced in working with suicide survivors and bereaved parents.

The cavernous hole of loss and pain is still here, comprising by far the largest proportion of my conscious and unconscious world. It’s still as deep and as black as it was on that first day, realising that I would never see or hold my son again. But over the past 2 years I have slowly redefined my relationship with the hole. In those early months of alternating shock and horror I was at the very bottom, surrounded by darkness and unable to see even a minute pinprick of light or hope. Very slowly, haltingly, tiny glimmers of light gradually illuminated footholds that allowed me to clamber out of the hole some days; though I couldn’t stay on the surface for long before I lost my hold and slithered down again. Over many months, I began to spend longer at the borders of the hole, figuring out ways in which I could avoid the slide back downwards. That time spent around the edges slowly extended, as I allowed other things to grow around me.

Those first little pricks of light reaching down into the darkness were provided by those who had gone before me. Those mothers and fathers who have lost beloved sons and daughters, and somehow survived, provided tiny seeds of hope that there can be life after loss. But the very first inkling of this came from my younger son who, in utter despair in the days after losing his brother and lifelong best friend, said to me “Mum, I’ve been thinking. This, sadly, happens to a lot of people. That means there must be ways of surviving it”. These wise words have stayed with me, and have proven to be true; there are ways to survive. But I couldn’t do this alone. My amazing family and friends have held me in my bleakest moments, have listened and born witness to my pain, have offered constancy, love, companionship, hugs, kind thoughts, daily messages, and faith in my capacity to prevail. Members of The Compassionate Friends, all bereaved parents walking their own journeys of grief, developing lives around their own black holes, have reached out to offer hope and compassion. More latterly, my wonderful therapist has helped me begin to renegotiate my relationship with loss, and to reconsider my future.

The patient I saw all those years ago achieved her therapy goals and created a life for herself alongside her grief. What I had omitted to factor into my fears and doubts was her own human resilience, strength, and determination. I continue to reside at the edges of my black hole, but like her, somehow I have managed to create a sort of life around the periphery. I still slip down into it quite often, and it can take a while to locate those footholds and clamber out, but I persevere. Because, well if she could do it...

Read more from Ligia in her blog A Therapist Surviving Suicide.