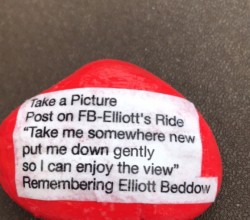 We remember my son Elliott Andrew Beddow each year by holding a Memorial Ride on or as near to his birthday.

Elliott was killed on his Harley Davidson a few weeks after his 20th birthday in 2016. Since the age of 14 he had never spent his birthday at home as it coincided with his cadets summer camp and his 18th birthday was spent on a lads holiday. He had promised me that he would be here for his 21st. We knew that his birthday was going to be particularly difficult so the ride gave us a focus.

I also created “Elliott’s Red Pebbles”, his favourite colour for people to take and hide, as Elliott had never travelled much other than family holidays. I have had photos posted on his page from all over the globe and there is a special pebble at the Harley Davidson Shop in New York. It is lovely to think Elliott’s memory lives on in places he never visited.

The Ride has visited Carding Mill in 2017 and 2018, Brean Beach 2019 where a cloud was seen in his image, a scaled down ride to Forest of Dean due to COVID in 2020 and this year his birthday falls on the day he used to host a pub quiz, so his ride is to the pub. I have also created some different pebbles this year to be hidden, which still have the Facebook page details on the back.

I hope this inspires other parents to create ways of remembering their child. 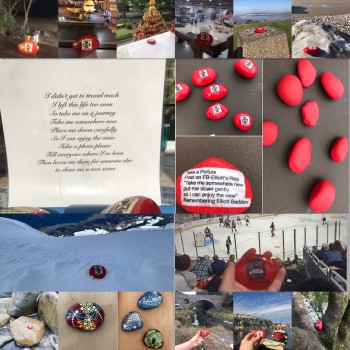