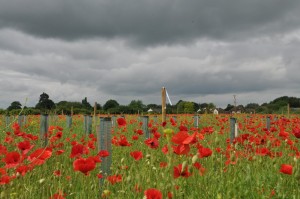 My son Dylan was an Arborist and dreamed of owning a woodland, so we knew how we could best honour him in death.

We planted 50 trees as part of a Reforesting Programme in Oxfordshire, with Sylva Foundation.

We’ve used one of the marker posts as a Ribbon Post, marking the first year after Dylan’s death. We held a ceremony there with friends and family, and each of us tied a ribbon to the post. And another of the posts have a wooden carving with Dylan’s name on it. The trees were planted in February 2017, and in June that year all the poppies came out. It hasn’t happened again. It was quite a sight. 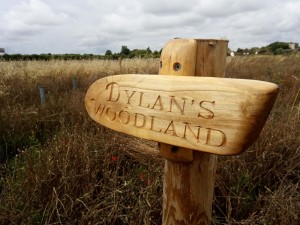 In Northumberland, where we live now, we have planted an apple tree for Dylan in an organic orchard created by a local farmer as a place for memorials. There’s a plaque I made in Clay, set in wood, next to the sapling with Dylan’s name on it.
We also bought a wooden bench for the orchard, and attached a plaque to it.

Dylan’s friends in New Zealand placed a bench with a plaque on the top of a hill, a popular place for bikers, and we went a year later to plant a native tree next to it, and leave some of his ashes in the soil with the tree. 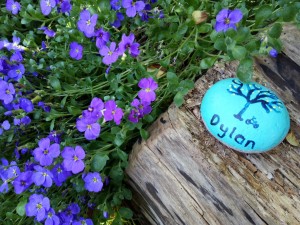 There’s another tree in Knoydart, Scotland, which we planted with friends of his.

There are pebbles all over the world with Dylan’s name on them. Pebbles with his name, a bicycle and a tree, were painted and offered to those attending Dylan’s funeral. Since then, I have given them to people who were unable to attend. We left one in the garden of our house in Oxfordshire. It’s very special to know that there are Dylan pebbles in New Zealand, Canada, Scotland, England, and a few European countries.

What a beautiful way of remembering your son Dylan. Growing trees and plants is a hopeful way of honouring a loved one and helping the planet at the same time. Very inspiring, thank you for sharing it.