Tom was born 8th April 1991. He had designs on a career in the Police, and was a Special Constable, a voluntary unpaid role. It was while he was working a night shift as a Special that he had an epiphany and realised that for him teaching would give him more opportunities to have a positive influence on young people. From that moment there was no turning back and he completed his degree in Maths teaching at Birmingham University in 2016, and went to teach at an upper school.

Tom succumbed to depression in the October of 2016 aged 25. He had just introduced me to his lovely Irish girlfriend in the half term, she also a maths teacher. His suicide in December 2016 was a devastating shock, the disbelief, the pain, anguish and all the attendant self recrimination and guilt of being a father unable to save his child. 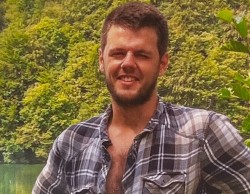 Tom was always the peacemaker and go between with his friends, and his students sent me a large number of cards expressing their grief. One in particular tells how Tom intervened in a bullying situation, and the card read “ My friend will never forget what you did for him.”

A year later I was to suffer a major episode of depression and psychosis as a result of Tom’s death and found myself an inpatient of a psychiatric hospital for eight weeks. My recovery was very slow, but as with my previous episodes of depressive illness it was marked by a burgeoning sense of creativity. What began as a corner of the garden being made into a rockery, in Tom’s memory went through several redesigns, each bigger and more expansive. It became clear that this was a labour of love, and there were several setbacks as I climbed what was for me a very steep learning curve in water gardening, but my resolve never wavered; this just had to be seen through to completion.

Several families stop on their way to school to look and spot the fish, and I have made new friends, with people telling me they have been watching my endeavours for a long time. Total strangers have brought me cuttings and water plants, others have thanked me for sharing Tom’s garden with them; he will delight that others derive pleasure from it.

It is truly beautiful.

Thinking of you. Tom looks like a caring and fun person and I am sure you’re very proud of him always. Wish he was still with you all x