Death of Joan Henderson, founder parent of The Compassionate Friends 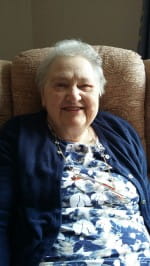 It is with great sorrow that I write to tell you that Joan Henderson passed away, peacefully, on the 3rd June in her 90th year.

Joan's funeral is on Tuesday 11th June at 12 midday at South Church, Stonehaven, in Scotland. There will be private cremation thereafter.

Most of you will know that Joan was one of the very small group who formed this Charity 50 years ago and it is through her courage, compassion and vision that we are able to offer comfort and solace to those who have suffered the worst loss imaginable.

I did not have the honour of meeting Joan but I have had cause to reflect often on the strength it must have taken to embark on the creation of this organisation. I have been full of admiration for her fortitude and strength.

Those of you who read “Compassion” will have noticed that in the January edition of the magazine, in ‘Thoughts from the Chair’ I incorrectly wrote that Iris Lawley was the only one of the original group still alive. I was wrong then and I was contacted by Joan’s daughter, Shona Henderson, who gently corrected my mistake and graciously accepted my profound apology.

In the commemorative edition of Compassion, there is a beautiful piece, written by Shona which gives us a picture of this remarkable woman who energised her grief into a passion for helping others. I was delighted to read that Joan was an avid knitter. It seems that she and I had so much in common and had I had the pleasure of meeting her, I’m sure that she would have had plenty of advice to give me on many subjects. The picture painted by Shona of a family immersed in crafting to sell and raise money for their fledgling “Society” gives us a snapshot of the determination of this small group. You have to smile as you picture the knitting and glueing and I hope to hear more about the knitted items that Joan made and Bills “Star Prize Bottles” in the coming months, as we commemorate their achievement. Thank you to Shona for taking the time to share her memories with us. The photograph of Joan that accompanies Shona’s piece speaks volumes. That smile is contagious!

Reading how the family responded to Billy’s loss is moving and awe inspiring and it is also testimony to the human spirit; responding to tragedy by instinctively turning to help others. How could we not be encouraged to follow their example and continue the Society that Bill and Joan Henderson devoted their lives to create?

We are all left deeply saddened by Joan’s passing, as we reach the milestone of her vision. I hope her family will have some comfort in knowing that Joan Henderson has left a huge legacy by helping to form The Compassionate Friends. All of us, around the globe, who receive support from this organisation, owe her a debt of gratitude. We will treasure her memory and that of her husband Bill and their beautiful 11 year old Billy for generations to come.

Our CEO, Carolyn Brice, all the Trustees (past and present), the staff and all the volunteers join me in offering my deepest and heart-felt condolences to the Henderson family for their loss.

TCF changed the course of my life after the death of my beautiful 9 year old son Scotty's death in 1999. During the first year anniversary of Scotty's death, I attended the TCF National Conference in Chicago- along with over 2000 other grieving parents. That is where I first heard the late Richard Edler speaking about his experience after the death of his own son. He said:

You can NOT camp in it.

But I promise you that when you get through that valley and to the other side- the sun is shining and you will again feel warm".

I clung to those words.
Those words changed my life.

I am happy to say that those words were true. I live a happy life now. I went on to have 2 more beautiful daughters. And I now have a grandson and a granddaughter and another granddaughter on the way. Time will forever be measured from “before” and “after” (Scotty died). But I’ve made it through the valley of grief. The sun is shining and I again feel warm. None of the life I live today would be possible we’re it not for TCF. I will be forever thankful for this brave and beautiful Mom who saved me by giving the world the gift of compassion. Rest In Peace beautiful Joan. Your light will also always shine. 💜

A Tribute to Joan.
This is a very short extract from the Keynote Speaker's bio for the welcome packs that Joe and iris Lawley gave the organising committee when accepting an invitation to be the speakers at the first Scottish Forum (Gathering) in Perth in 1998.

Quote
"Following the founding of The Society of the Compassionate Friends by Bill & Joan Henderson, Joe & Iris Lawley, Betty Rattigan, all the bereaved parents and The Reverend Simon Stephens-the assistant chaplain at the Coventry & Warwickshire Hospital-the infant TCF were faced with a number of questions. The first was - how would it work?

The answer: JOAN HENDERSON, the co-ordinator, scrutinised the obituary columns and when we were sure it was a child we simply went along to the house, armed only with a bunch of flowers and the introduction "We're the Compassionate Friends. We understand you've lost a child. We are also bereaved parents".... Unquote.

Thank you for everything Joan - RIP
TCF Scotland.