Gathering in Northamptonshire 'bursting with positive'. 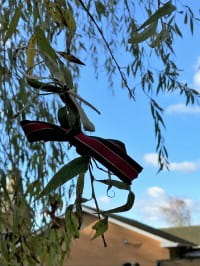 “That gathering was bursting with positive! Broken people who fight to take another breath at times but can still laugh as much as they cry and hold the hand of another without any judgement”.

Elly Sutherland came to her first Compassionate Friends Gathering from 10-12 November 2017. Here she shares her impressions and experiences of the weekend.

I spent this past weekend at Sedgebrook Hall in the beautiful Northamptonshire countryside with well over a hundred other grieving parents. It was the National Gathering of The Compassionate Friends. If I tell people I am going to these weekends they look a little shocked. I mean who wants to get with a whole bunch of people that are sad and broken. Why would we want to spend a whole weekend together?!

From Scotland in the north to the Isle of Wight in the south we came, sharing stories of our beautiful children in an atmosphere of acceptance and without judgement. Some are new in their grief and some are veterans. Multiple loss, as in my case, is not so prevalent. People look at my badge in disbelief and ask about Rachel AND James. One or two thought maybe I had lost James and my name was Rachel so hard is it to imagine that both could be my deceased children. I cannot believe it myself!

I am never quite sure if it is the right thing to attend but each time has brought new friends, new perspectives, an opportunity to receive love and more importantly, to give it away. It requires I step out of my comfort zone. Such devastating losses shake your confidence challenging everything you thought you knew about yourself and life. Finding a new normal takes time, patience, and a lot of soul searching. My friend, Liz, talked me into joining the little voluntary choir. I have not sung in a choir since before Rachel died. Initially I was reluctant, but something brought a change of heart and I agreed. As it turns out this was the highlight of my weekend. We practiced a couple of times, with a lot of laughter, and sang our song for the whole group at the closing on Sunday. Singing in this small but enthusiastic group filled me with such peace and unexpected joy. Somewhere over these past years I had forgotten how to sing. I found my voice again.

Driving home, I thought about the immense sorrow and heartbreak in that room. Well over one hundred parents who have had to learn to live without their children. Were there tears? Oh yes. Tissue boxes are everywhere! It is accepted, never judged, and warm, tight, hugs are welcomed. But much more than that there was abundant laughter, joke cracking and plain old silliness. Quotes and instruction on being positive are abundant these days and often being real about our feelings is perceived as negative. These support groups are sometimes viewed as places for people to be miserable, sympathy seeking beings, who want to dwell on their sadness. Nothing could be further from the truth. That gathering was bursting with positive! Broken people who fight to take another breath at times but can still laugh as much as they cry and hold the hand of another without any judgement.

The song we shared perfectly describes why I go to these gatherings. It is a time of recharging the battery, but so much more is the opportunity to give and receive the strength needed for that next step.

Bring together lives that have been torn apart.

It’s a never-ending gift that circles back again

This is why, why we lift our voice, why we sing as one in harmony.

The photograph shows us all tying ribbons on the memory tree for our children. My friend Margaret, who I met earlier this year at another gathering, put ours together for Rachel, James and Dylan. Fly high, we said, fly high.

Reflections on TCF NATIONAL GATHERING in November 2017
by Jimmy Edmonds

“Having experienced what many would call the worst loss of all, having suffered such a huge catastrophe, I had a sense that we had all come to a point in our lives where we had already junked that script about being men…”

What was it that our Chair of Trustees, Maria Ahern, said about looking forward to those who are further down the road of grief for inspiration – and looking back to those more recently bereaved for the helping hand we can offer them.

I guess this is at the very core of purpose for THE COMPASSIONATE FRIENDS, a unique charity in the world of bereavement. As the only truly peer to peer grief network in the UK, TCF has been a lifeline for myself and my partner Jane and we suspect for many, many others.

This was our third visit to the National Gathering at Sedgebrook Hall since our son Josh died in 2011 and I suppose we’ve got our hands reaching out in both directions. Personally I look forward to the father’s group and have had the pleasure of facilitating a few for TCF. Bereaved dads are still very much in the minority when it comes to seeking out help. We all recognize that as men and as fathers we grieve differently from women and mothers. There may be some good biological reasons for this and we could usefully debate the nature/nurture business’ til the cows come home … but in the father’s group this weekend these differences weren’t really in the forefront of our minds as we shared our grief. Our ability or inability to express emotion wasn’t really an issue as we shared tears and laughter in the telling of our stories. Themes that emerged were in a sense more ‘ungendered’ – the quest for understanding (why has this happened to me), what have we done to try and heal the fracture in our lives (what are our coping strategies), how does our grief progress over time (do things get better). Issues and feelings that stereotypically belong the male domain – anger, repression, helplessness, our propensity to be fixers, to do stuff rather than just be with stuff, and importantly our resistance to displaying any kind of weakness or vulnerability – all these while present in the room, had taken second place to our need to express our grief as bereaved parents, not just as bereaved dads.

Having experienced what many would call the worst loss of all, having suffered such a huge catastrophe, I had a sense that we had all come to a point in our lives where we had already junked that script about being men and that grief was working on us in ways that while acknowledging our maleness, our masculinity, and our role as fathers, was actually revealing our strengths and our compassion and our loving natures in ways that were both surprising and true. It seemed to me we were all working with our pain rather than against it and I’d like to thank TCF for providing us with the space to explore our feelings in such a safe environment. And thanks also to all those Dads who came, shared their sorrows and gave us all hope.

Another highlight of the weekend was the opportunity (and the honour) of showing our new documentary A LOVE THAT NEVER DIES. I have to say that was it not for the support and the strength that we have had from TCF, we would not have had the wherewithal to embark on this journey – a trip across the USA to meet other bereaved parents. Indeed without the TCF we would probably not have had the idea that grief needs a voice. And that is what we have tried to do with the documentary – to give grief a voice - especially grief for a child. In our culture where grief is seen as a desolate place, in our society where conversations about death, dying and bereavement are so fraught with anxiety, in a world in which thousands will mourn in silence, we have become very aware that grief really does need a voice. And we hope we’ve given grief an authentic voice – we are after all the bereaved talking to the bereaved for the bereaved – something rarely if ever seen on our screens. We’d like to thank TCF for inviting us to show the film at the National Gathering; we’d like to thank TCF (USA) for their support as we researched the film; and we like to thank all of our contributors who were so open with their grief and for sharing their experiences.

After the screening a question came from the audience - what had we learnt from making the film? So much but three things immediately came to mind – there is real value in sharing the story of your grief both for the speaker as for the listener; that accepting the pain of loss and ‘leaning into grief’ is so much better than shying away from grief and shutting out ones feelings; and that rituals matter however small or insignificant or silly they might seem, rituals whether invented or borrowed are important in providing a structure for the road we must now travel.

Oh and a fourth thing – as a Mum from Memphis told us “being bereaved gives you a wide latitude for craziness”.

A LOVE THAT NEVER DIES is a BEYOND GOODBYE MEDIA production for THE GOOD GRIEF PROJECT. The film will be released to the general public in April 2018 and will be available as a video download soon after that.

Jimmy, I lived in the USA for thirty years and attended Compassionate Friends in Lexington, Kentucky. I met you and Jane at dinner on Saturday evening. Don't think I mentioned it. Regards to you both x