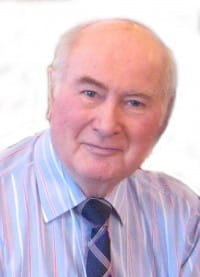 UPDATE on 20th June: The funeral of Joe Lawley will take place at Nuneaton Crematorium on Thursday 7th July 2016 at 2.15 pm.

It is with very great sadness that we learned of the death of Joe Lawley earlier today - Monday 13 June. Joe was one of the Founder parents of The Compassionate Friends.

Joe was admitted to hospital on 3 June and his wife Iris was with him when he died.

He will be greatly missed and we send our love to Iris and their daughters at this sad time. Without them, and the other Founder members, TCF would not have existed.

On hearing this sad news, our Chair of Trustees, Dr Margaret Brearley commented: "Joe and Iris, together with the Hendersons and Simon Stephens, created TCF in 1969 – now a worldwide group of caring organisations uniquely comforting bereaved parents. Their shared companionship and informal mutual support in their overwhelming grief allowed them to turn outwards to seek other similarly grieving parents, with the result that literally hundreds of thousands of grieving parents have been given comfort and friendship – and in many countries – all this inspired by their example and their words".

If you wish to contact Iris Lawley, please write via The Compassionate Friends, 14 New King Street, Deptford, London SE8 3HS. We will pass any messages to Joe's family.

Read about the founding of TCF.

This moving and beautiful poem was written by Joe.

The Gift
by Joe Lawley

I have a gift.

I did not want this gift, it meant suffering and pain.

The pain came because of love.

A love which had manifested itself in a child.

The child brought its love to me and asked for my love.

Sometimes I did not understand this.

Sometimes I did not appreciate it.

Sometimes I was too busy to listen quietly to this love.

But the love persisted; it was always there.

One day the child died.

But the love remained.

This time the love came in other forms.

This time there were memories; there was sadness and anguish.

One day a stranger came and stood with me.

The stranger listened and occasionally spoke.

The stranger said "I understand", and did.

You see the stranger had also been this way.

We talked and cried together.

The stranger touched me to comfort.

The stranger became my friend as no other had.

My friend said "I am always here", and was.

One day I lifted my head.

I noticed another grieving, grey and drawn with pain.

I approached and spoke.

I touched and comforted.

I also had the gift.

So sorry to hear the sad news about Joe. I had the privilege of meeting Joe many years ago when I was working at TCF in Bristol. I am sure he will be missed by many.
My thoughts to Iris and his family.

I was so sad when I heard Joe Lawley had passed away. I was so lucky to have met Joe & Iris, such a lovely couple , I have spoke to joe on the phone as well, nothing was to much trouble, he was very kind and caring & always wiling to help. TCF helped me when my daughter Erika died in 2003, they were my lifeline, I can't thank you enough , & all the other people who make up this fantastic organisation , Sending love & a hug Iris & to your Girls , Aileen xx

a wonderful and caring man who we were privileged to call a friend for many years. Without the work of Joe and Iris in 1969, we and many others would have found it hard to survive the loss of our son. God bless you Joe, and thanks for all you did.

I was helped by the CF as we lost our baby daughter in Dec 1969 the year that Joe & Iris & Simon Stephens started in my home city of Coventry. Deepest sympathy tomIris & her family. Always recommend the society to anyone who has lost a child. Thank you.

Simply a humble man with a great big heart - thank you for being you and giving us the strength to carry your "GIFT" sending love to Iris and family at this sad time.

I am so sorry to hear this news. I didn't ever meet Joe but I have only ever heard him described as a wonderfully gentle, kind and caring man. When my daughter, Rosie, died in 2004 I found TCF quickly, thank goodness, and will never be able to thank the people in this organisation enough for being my lifeline. Thank you Joe and Iris for setting up this brilliant charity and lasting legacy to Kenneth - I owe so much thanks to you both. My thoughts are with you, Iris, and your family. x

Very sad news. CF helped me in 1977 when my daughter Sonya died aged 3 months. I have not been in touch for a long time but remember how wonderful CF was at the time.

So sorry to hear this. We owe Joe and Iris so much in helping to set up this fantastic charity. I have benefitted enormously from meeting other bereaved parents through TCF, and I know many many others have to. Thinking of you Iris now at this sad time. With love Sue xx

I am so sorry to hear about the lovely Joe Lawley. I was privileged enough to meet Joe on many occasions and I have never met a nicer man. Not only did Joe remember the people he met but he also had the 'gift' to remember their children's name. With love to Iris and family X

We can only echo the thoughts of those who have already commented and add that Joe and Iris also had a wonderful sense of humour which helped them and others to deal with the terrible sadness and pain they experienced. It was always a pleasure to share time with them both and Joe will indeed be sadly missed by all who knew him and most especially by his beloved family. He will be reunited at last with Kenneth.

Such a lovely man.What a wonderful thing that Joe and the other founder members did.We have greatly valued his kindness love and support over many years.Iris and the rest of the family will be very much in our thoughts and prayers.

Joe - a genuine lovely man who was respected and admired so much up here in Scotland. He was an inspiration and we will always be eternally thankful to Joe, Iris and the other co founders for "The GIFT" he gave us "The wonderful Compassionate Friends" Our thoughts this day are for Iris and the family - bless them.

Like everyone else, we are deeply saddened to hear of Joe's death and hold Iris and their daughters in our thoughts and prayers today.
Joe was not only one of our Founders - he was a personal friend and an inspiration to so many Friends around the world. The first International Gathering was his dream and he had planned to write a letter for the 6th International Gathering in Frankfurt next month, since failing health had prevented him from travelling in recent years.
Jim and I were privileged to have worked closely with Joe and he always had a clear vision of what he thought was best for The Compassionate Friends.
We owe all our Founders a deep debt of gratitude and trust that Iris, Betty and Simon (the only three remaining Founders) know just how much we love them all. We will miss Joe and he will always be remembered with much love and affection by us all.