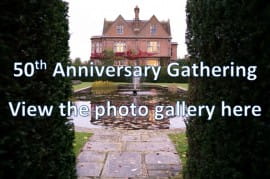 Maria Ahern, Chair of Trustees of The Compassionate Friends, reviews the weekend of 1-3 November 2019 when 250 ‘compassionate friends’ gathered in the Buckinghamshire countryside to commemorate our charity’s Golden Jubilee year.

"Since we have just received a preview of the photographs of the 50th Anniversary Gathering, we thought that we would give you a whistle stop guide to the event and the programme. This is just a taster to go with the photographs which you can view in the Gallery on this page and I’m sure that we will be talking about it again in the New Year with a possible commemorative book to record the event.

So, what did we all get up to nestled in that sprawling hotel in the Buckinghamshire countryside?

Some of you will know that this event was two years in the planning. The Gathering Committee, the Board of Trustees, staff and volunteers along with the help of Gill Hardy’s colleagues who came to provide professional support, formed a dedicated team ready to meet any challenge. We planned and re-planned and thought and re-thought until we were confident that we had covered every base. Well, almost!

Many of our attendees were collected from the train station by Gary Thompson – who offered a wonderful shuttle service in a minibus provided by Ford Motor Co. On arrival, delegates were given their delegate bags containing some souvenir keepsakes of the event with our commemorative logo. The programme contained a floor plan of the hotel, which was much needed as every possible space of the building had been allocated for the use of workshops, sharing sessions, speakers, food and of course the bar. We didn’t leave an inch of the hotel unused which proved a bit of a challenge on the first evening given the unexpected turn of events. But challenges are meant to be overcome aren’t they?

The hotel staff were expertly briefed and looked after us exceptionally well. The afternoon tea that was served for our welcome was delicious and set the tone for the weekend. Thankfully there were a couple of walks included in the programme and some exercise workshops too to help with the calorie intake.

As people arrived, the hotel came alive with the chatter of renewed friendships and of people meeting for the first time and quickly getting to know one another. I have often said that strangers become friends very quickly on Planet Grief and that was very evident this weekend. For many, it was their first gathering, for many more it was a return to the tried and tested formula of our smaller gatherings but on a much larger scale. We tried to cater for all needs and though some might have thought that the programme devised by Margaret Brearley was ambitious, to us it was an attempt to include something for everyone and showcase, in a short weekend, the work that has evolved in the past five decades. The simultaneous running of a programme for the newly bereaved and one for the international delegates along with the main event was a masterclass of logistical planning. Congratulations and huge thanks to all involved in that micro planning for which I take absolutely no credit.

Since this was an “international gathering” we were blessed that so many of our friends and colleagues from TCF around the world came to join us to commemorate half a century of “Sharing Grief, Finding Hope”. The international element of our growing charity is hugely important so it was particularly helpful that time was set aside for all of our overseas friends to share their experiences of running this charity from their own countries, as well as sharing challenges and innovations as we continue to expand our reach across the globe. Thank you everyone for travelling so far to be a part of this event with us. Your contribution was invaluable.

It seemed as though our metal was to be tested as soon as we were due to begin. An early accident (I fell off the stage, banged my head and needed stitches) derailed the careful planning but it was testament to our teamwork and cohesion that the situation was calmly taken in hand by our host. While we might have found ourselves a woman down and the main room out of action for the evening (while the casualty was taken care of) the programme nevertheless continued as planned (if a little later than advertised and in a different room). As I had said the night before, in what was humorously referred to as my “pep talk” to the team, “Nothing will go wrong. It may go differently but it won’t go wrong”. I was right!

As well as the simultaneous programme to which I have referred, there were workshops, sharing sessions, therapeutic discussions, crafting, excursions, walks, knitting, various forms of exercise. The list is endless with a programme that extended over 34 pages. I thought that packing my swimming costume was a bit optimistic but even without the fall, I don’t know where I would have found time to go to the spa. There was so much on offer and all designed to keep the grief journey at a measured pace and to provide tools for coping when it all gets too overwhelming.

The Gathering also gave an opportunity for our new President to come and meet us and take part in the occasion which she did with dedication and enthusiasm. On behalf of all our members, I repeat our gratitude to the Countess Mountbatten of Burma for accepting our invitation and thus cementing the relationship that had begun when she became our President.

Our guest speakers all provided a similar message which was on point with the theme of the gathering. As well as hearing moving words from our President, the Countess, we listened to inspiring talks from Libby Purves, Baroness Sue Miller, Hamish Elvidge, Cathie Seigal, Thomas Harding, Sangeeta Mahajan and Linda Hurcombe. All of them gave us tools with which to adjust to a life of mourning for our children. The theme for our gathering was “Sharing Grief, Finding Hope” and a quick glance at the photographs will show that the message was conveyed beautifully and created the many hugs and warm smiles that were plentiful throughout the weekend. Yes, there were tears too but there was always someone very close with a box of tissues on hand to help wipe them away and bring back the smile.

It was wonderful to hear from Shona Robertson (sister of Billy Henderson, the son of Founders of TCF, Joan and Bill Henderson) who gave us an glimpse of her childhood memories; of losing her 14 year old brother at the age of 6 and the formation of “the Society” as it was known then. Her account was moving and at some parts humorous but there wasn’t a dry eye in the room when she read some of the poems that her brother, Billy, had written before he died. The poem to his mother was so insightful from an 11 year-old boy as it ended “Billy Henderson 1968 Always by his Mother’s side”. Billy, you reduced me to tears hearing your words but thank you for that message from 50 years ago.

As I have written in my Thoughts from the Chair in the Winter edition of Compassion, it was humbling to be in the presence of so plentiful strength and compassion and seeing the result of so much hard work filled me with enormous pride to be a small part of this organisation and the work we do through our dedicated army of volunteers.

By the time we all got ready for dinner on Saturday night, we were all enjoying each other’s company just as old friends do. The atmosphere in the dining room was just as it would be at any dinner. Laughter, good food and plenty of clinking glasses. The talk was varied with our children easily included in the conversation while interwoven with the usual chatter of dinner companions. On our table we were talking about current affairs, the merits of living in the country and TV shows of the 70’s amongst other random things! We were from very different backgrounds and had very different lives but we were all the same and with a common experience that bound us instantly. Anyone looking in may have thought that we were ordinary people in that dining room, doing an ordinary thing. There was even a uniting sing-a-long at the end of the meal when our guest speaker surprised us all with a beautiful and heartwarming rendition of Abba’s “I had a Dream” to which we all joined in. An ordinary dinner? No, there was nothing ordinary about the people who had gathered together that weekend and who sat down together in that dining room. No, the weekend, like the people was very far removed from ordinary but it allowed us to participate in the ordinary activities that were once commonplace.

It was heartwarming, inspiring and hopeful and I am so pleased to have witnessed the beauty of it first-hand. Congratulations to all who have contributed to the international growth of this charity over the last 50 years and long may it continue. Here’s to the next decade as we continue to share our grief and thus provide hope to those for whom, like us, the unimaginable becomes reality.

Once again, I extend my gratitude to everyone involved; planners, speakers, volunteers, staff and to those of you who came and joined us to commemorate this anniversary. A huge thank you also to our sponsors and donors (too many to mention here) who helped us raise some money for the charity as well. Finally, I hope you will all agree that special thanks must go to Linus Moran who, accompanied by his lovely wife Andrea, gave up their time for the whole weekend and captured the warmth and atmosphere of the occasion so beautifully. I hope that you enjoy looking at these few photographs that Linus has produced with the promise of more to come in the New Year".

VIEW THE GALLERY OF PHOTOS OF THE 50TH ANNIVERSARY GATHERING

A wonderful and inspiring weekend made real by these beautiful photos. Thank you x