Stories of grief, hope and resilience in feature documentary 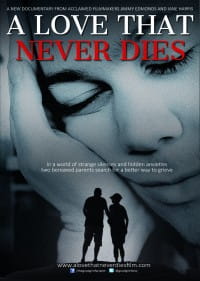 Jane Harris (Trustee of The Compassionate Friends) and Jimmy Edmonds have recently completed production of a 75 minute feature documentary A LOVE THAT NEVER DIES. Following the death of their son Joshua in 2011, they set off on a road trip across the USA to find other bereaved parents with whom to share their story and find answers to some basic questions – why do we grieve, how do we grieve and why are we afraid of those who do grieve?

They now are delighted that they‘ve been invited to show the film at the The Compassionate Friends USA national conference in Orlando Florida at the end of July.

“TCF were very helpful as we planned our American trip so it’s important to us that we are able to screen the film to such a significant gathering.”

“We’ve been told that the film is beautiful and poetic and that will change the way the world sees grief. A big claim but we do hope that it contributes to a growing conversation about death, dying and bereavement in ways that will both move and inspire.”

The documentary will also be shown at this year's UK TCF National Gathering in Northamptonshire from 10-12 November in a special screening. It will be released to the general public early next year with a planned UK cinema tour followed by availability on the internet.

A LOVE THAT NEVER DIES is a Beyond Goodbye Media production for THE GOOD GRIEF PROJECT.

I will definitely be watching this when it becomes available. I am a Twinless Twin still struggling with the loss of my twin brother in 2008.