Thoughts from our new Chair of Trustees 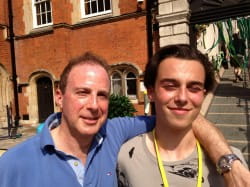 Our new Chair of Trustees, and bereaved dad, Andrew Miller, writes with huge honesty about the loss of his 19 year old son, Fabian, and his hopes for his 3 years tenure as Chair of our charity.

Let me start by introducing myself as the new Chair of trustees of The Compassionate Friends. Many of you know me from one of the many retreats where I have volunteered over the last 3+ years and most recently at our amazing 50th Anniversary Commemoration held over the first weekend of November 2019 at Horwood House where I took on the role of compere.

I want to use my first “Thoughts from the Chair” to tell you a little bit about myself, what brought me to Compassionate Friends and what I have been doing over the last few years as a volunteer and trustee of TCF.

But first, I want to take this opportunity to say a huge vote of thanks to the person whose shoes I am stepping into, our wonderful Maria Ahern. Under Maria’s watch our Charity has grown from strength to strength. We now have over 90 support groups nationwide, run at least seven weekend support retreats every year for parents and siblings and last year saw us celebrating the 50th anniversary of The Compassionate Friends.

The feedback from that event has been incredible and the fact that it happened under Maria’s watch is a credit to her. Those of you who were there will know that Maria made her mark on that weekend from the very start when she fell off the stage hitting her head in the process. But even as she lay there waiting for the ambulance, Maria was giving out instructions that ‘the show must go on’. And so it did and thankfully with Maria being a part of it. I will always remember Maria’s speech on the Saturday morning, talking about her accident, how there was nothing she could do about what had happened and how strangers came to help her. Her use of metaphors was wonderful and set the scene for the remainder of a truly memorable commemoration of The Compassionate Friends and a celebration of what TCF has done over the last 50 years.

So Maria, from me and from our fellow trustees a huge thank you for your leadership over the last few years. I have no doubt that I will turn to you for your valuable input over the next three years.

If, five years ago, you had asked me who I was, I would have told you that I am from London, where I still live and work as a lawyer and barrister, as I have been for over 30 years. I might have told you about other places in the world I had lived, what else I had done, my likes, dislikes and hobbies. In short I would have given you my world view of me as it then was.

But that changed on 5th January 2015, when I lost my youngest son Fabian. I am still many of the same things I was, but first and foremost I am a bereaved dad, and it is something I very much wear on my sleeve and never hesitate, given the right situation, to tell others. Sometimes people (especially the non-bereaved) are surprised at my description of myself, but it is how I feel and view myself and for me it is much more significant than where I live or what I do.

Fabian was only 19 years old when we lost him to the curse of drugs, or as one kind bereaved parent described it as ‘an accident of youth’. That was very early on and I found that comforting at the time and still do. Fabian was the youngest of my two sons. Nothing can prepare you for the type of death that is so very sudden and so very unexpected. From that fateful day in January 2015, I found myself on a journey, my individual grief journey, just as you and all bereaved parents, siblings and grandparents have experienced and continue to experience. That grief journey starts the moment your child, sibling or grandchild dies. But it is a journey without any destination, just many, many stops along the way.

It was my partner, Esther, who found TCF, and that led me to my first TCF support group in Finchley, North London, run by Pat Bradshaw, who has been running the group for the best part of 30 years. I have heard lots of people describing their first encounter with TCF, the fear they had of going to their first meeting, the anticipation and the simply not knowing what it would be like. I was not scared but I do remember feeling numb and detached, finding it difficult to get my head round the fact that I was going to a meeting for bereaved parents… me?… how could that be? How could I be a bereaved parent? Surely they would tell me I was in the wrong place and there was no need to stay? But of course I was very much in the right place. I was not turned away, I was welcomed with open arms, with a smile and many hugs and with a warmth I had not expected.

One significant thing in my first TCF meeting that helped me very much at the time, and has to a large part shaped my grief journey, was listening to a mother, Christina, telling her story about losing her beautiful ten year old daughter, Sophia, to brain cancer. It was like so many other stories, a tragic story, told with sadness, pain, with tears but also with such dignity. When she finished I had what I can only describe as an awakening. It would have been impossible for me, having heard Christina and Sophia’s story to have said… “Well you think that is bad… just wait till you hear my story.”

On the contrary, what Christina’s and other parents’ stories showed me, was that I was not the “only bereaved parent in the world” and most significantly I was not alone. It is so very easy as a bereaved parent to feel like a victim… and of course I did. But what that first meeting showed me was, I was not a victim, I was with so many others who, like me, were going through the same thing. I also realised that feeling like a victim did not help me and I knew that it was not the path I wanted to continue on and I am sure it is not the path that Fabian would have wanted me to take.

The more my TCF world enlarged, the more bereaved parents I met, the more difficult it became for me to retain a victim mentality. A terrible, tragic and painfully sad life changing event had happened to me, but it had also happened to many other people, good, caring and loving people. And sadly it will continue to happen to many others here in the UK and around the world.

I had found a new family of friends who were always going to be there to give me support along this bumpy road of grief. These friends spoke my ‘grief language’, understood what I said, empathised with me, because they understood their own grief and knew how they had felt in the early stages of bereavement. I started going to as many TCF meetings and social events as I could.

Along the way, I met Margaret Brearley, who needs no introduction, the then Chair of trustees. I found myself at Margaret’s request, sitting at a table of the TCF Board of Trustees. I had not even reached the first anniversary of losing Fabian. I do not know how she got me there, but Margaret’s persuasion was tenacious and impossible to ignore. I was co-opted onto the trustee board and a year later elected as a trustee and have been a trustee ever since.

I have been going to TCF retreats since 2015 and started volunteering for them at the beginning of 2017. There was no Central or North West London support group and I was determined to set one up. The key to being able to run a support group is when you know that you do not have to keep telling your own story (although you might still want to), but realising that your role as a volunteer is to listen and allow others to tell their story. For me that time came after three and a half years. With the assistance of TCF’s brilliant CEO, Carolyn Brice, our events’ coordinator, Sharon Rose, and one of our sibling trustees, Jen Hughes, we set up our monthly support group at Kilburn, London at the location of the TCF Office. It was clearly needed as many months we have over 20 parents and siblings. I am especially pleased that we have been able to attract so many siblings to our support group and thank Jen for her efforts in this regard.

It felt like a logical step to move from being a trustee to being the Chair of trustees. I thank all my fellow trustees for their unanimous vote of confidence in electing me as their Chair and I promise I will do my uttermost to ensure the continued success and proper governance of our wonderful charity.

And so that is me… that is my story. Over the next three years I hope to share with you my views, hopes and aspirations for the charity from my position both as Chair and as a volunteer and, of course, as a bereaved dad.

It is hard to think of a comparable charity. TCF is there to help those who find themselves in a situation that was beyond their imagination and understanding. Very few have ever heard of it before the death of their child, sibling or grandchild. It is a charity that many non-bereaved do not understand and why should they; we were in the same position before our loss. Yet despite all this it is a charity that when found by those who need it, provides a support and lifeline that is impossible to explain but so very possible to feel. Over the last few years many parents have told me that ‘they do not know where they would be but for TCF’ and that ‘TCF provided then with a lifeline’. I am so very proud to be the Chair of the trustees of a charity, your charity, that does so much and helps so many.

I was recently asked, ‘What does TCF do?’ I could have described the support groups, the on-line facilities, the publications, the retreats and many more things. But I did not. Instead I took inspiration from Gina Claye’s wonderful book – ‘Don’t Let Them Tell You How to Grieve’. I told them that TCF helps bereaved parents and families on their grief journey. It remains for every one of us our own grief journey. TCF cannot and does not tell you how to grieve, but is there to help you on your journey. Do we help people grieve better? I am in no doubt that TCF helped me grieve better and helped with my on-going relationship with Fabian. I know that is the same for many of you and that it will be the case for many more who will join our TCF family. It is the very reason why we need to keep doing what we do so well.

I look forward to working hard on your behalf over the next three years and to meeting as many of you as possible. Until the next time, I send you all my warmest wishes.