For The Love Of Mike 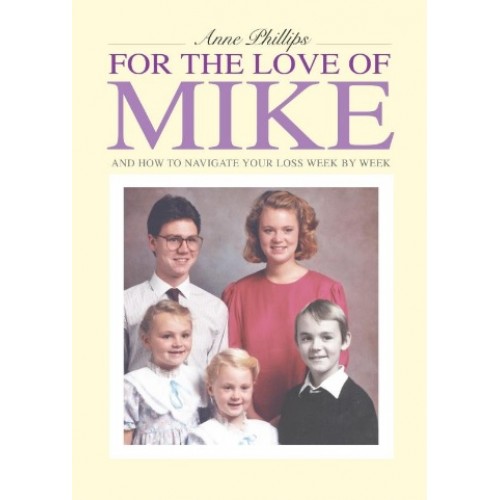 For The Love Of Mike: and how to navigate your loss week by week

Following the deaths of two of her five children, Anne felt a compelling need to write about the tragedy of her son's passing and to also share her wisdom about bereavement, in the form of a weekly column (formerly published in Canada). Her youngest daughter, Angi, died from breast cancer in 2015 but this book's focus is on her son, Mike, who died in 1993 through playing a hyperventilation game commonly known as 'The Choking Game'. Her writing is intended to inform and bring comfort to those working through their own grief process.

Our librarian, Mary reviewed For The Love Of Mike and wrote:

"A brilliant source of help and advice when you've been bereaved.

As a bereaved mum myself, this book struck such a chord with me. It's about the death of Anne's son Mike, about how she coped with this 'catastrophic stressor', as psychiatrists describe it, and how she went on to help others by writing a column, about bereavement and grief, in a local newspaper. The first part of the book is about Anne's life, her family, what happened to Mike and the aftermath of that terrible event. For me the best chapter is 'Mike's Last Days'. in which Anne intersperses the events from the 5am phone call alerting her to a problem to walking out of ITU a few days later leaving her beloved son's earthly shell behind, with her own thoughts and feelings as events unfolded. This is a very immediate, raw and powerful piece of writing and I found it so moving. Time and again I found myself thinking 'that's how I felt, that's what I thought'.

The second half of the book consists of the articles Anne wrote for a newspaper after Mike died and they are a very useful resource in themselves. They are short, easy to read and give excellent advice on all aspects of coping with bereavement, from the first days through to coping with special occasions and everything in between. It's a great book for keeping to hand and dipping into when you're faced with something new and you need a bit of advice from someone who's actually been there".

Anne Phillips was born in Bristol, England in 1945 and emigrated to Ontario, Canada with her family in 1957. Eventually she married, bore five children and then divorced, after which she attended university and earned a Master's degree in Social Work. In 1998 Anne satisfied her life-long yearning to return to the land of her birth and once again took up residence in the Bristol area.