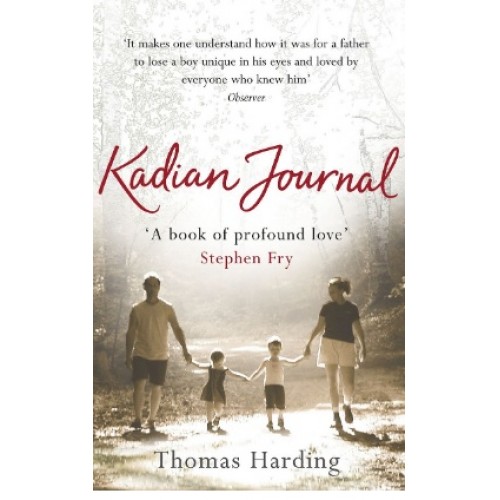 In July 2012 Thomas Harding’s fourteen-year-old son Kadian was killed in a bicycle accident. Shortly afterwards Thomas began to write. This book is the result.

Beginning on the day of Kadian’s death, and continuing to the one-year anniversary, and beyond, Kadian Journal is at once a record of grief, a moving tribute to a lost son, and a celebration of a life lived to its fullest.

"Out of unbearable grief comes a book of profound love: there is no shred of self-pity in this marvellous book. The malicious and random brutality of fate and the racking pain of loss have met their match in Thomas Harding who miraculously turns those horrors into something memorably great." (Stephen Fry)

"This is the very best account of a parent’s bereavement I have ever read, a powerfully immediate and clear-eyed record of a devastating experience. It is also a love story, true and deep – offering film-like clips of the joys of parenthood, and of the agony when it abruptly ends." (Julia Samuel, Founder and Patron of Child Bereavement UK)

"A wonderful book, unflinching in its portrayal of the agony - and fury - of grief but at the same time filled with the incandescent love and joy felt by a father for his son, his beautiful boy. Rarely has that intimacy been so lyrically and beautifully described." (Sally Brampton)

Thomas Harding is a journalist who has written for the Sunday Times, Financial Times and the Guardian, among other publications. He co-founded a television station in Oxford, and for many years was an award-winning publisher of a newspaper in West Virginia. He lives in Hampshire, England.